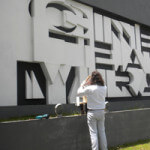 One of the most representative features of the contemporary world is shifting. Migration and population itinerancy have been human phenomena of all times. Natural disasters, adventurous dreams, will for power and control of certain human groups over others, ambition for economic and later technological development drove human beings to exploration and conquest of other universes.

Today, that relationship between what we define as “here” and that which is outside its boundaries, it is much more porous, sneaky, and even sometimes virtual. The concept of the nomadic applies therefore not only to humans but also to geographies, geopolitics, and yet the relations established on cyberspace. It becomes center of contemporary theory and thinking.