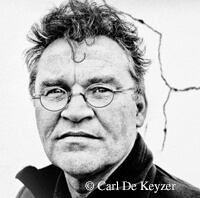 Carl De Keyzer likes to tackle large-scale projects and general themes. His style is not dependent on isolated images; instead, he prefers an accumulation of images which interact with text (often taken from his own travel diaries). In a series of large-scale tableaux, he has covered India, the collapse of the Soviet Union, the reinvention of Eastern Europe and –more recently– modern-day power and politics. The selection of photographs in the show belongs to a wider series belonging to two books published in 2009 and 2010, “Congo (Belge)” and “Congo Belge en images”. The first book consisted of contemporary photographs whereas the second included a selection of remastered glass negatives portraying the birth of the colony (1890 – 1920).