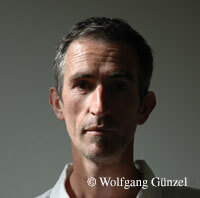 Francis Alÿs is an artist whose practice combines different disciplines: architecture, urbanization, social practices and policy. He has used a broad range of media from painting to performance. His artwork questions Latin American development policy and its “Modernism without Modernity”. His projects turn over into the creative potential of the failure and the absurd. In 1998, Alÿs started to investigate the subject of non-consecutive lapses of time by means of a series of short films which intention was (like in “Politics of Rehearsal”) to render the time structure he encountered in Mexico, and to some extent in Latin America. It also evokes as it were the scenario of a society wanting to stay in an indeterminate sphere of action in order to keep functioning, and which needs to postpone any formal coming into operation to define itself against the imposition of Western Modernity.

Click here to read an article of Françis Alÿs in the news.