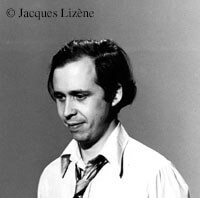 In 1970 the then twenty-three-year-old Belgian artist decides to undergo sterilisation by vasectomy that is cutting and tying deferent ducts. With this, as he says, “I decidedly cut off the play of generations”. It’s an odd individual, calling himself a “minor master from Liège” or a “mediocre artist”, jeering at everything and at him, deliberately predisposed to farce and being someone “pitiful”. In later period he would call this operation an “internal sculpture”, obviously invisible (art has passed not only to life, but also to the interruption of its transmission). There’s no emphatic pose in it; vasectomy would become the theme of a stupefying song from his “pathetic music-hall” (otherwise amusing).

Also in his numerous performances he presents a parodic and even too metaphoric version of that operation (taking out from the fly a cucumber or another vegetable of cylindrical shape and cutting it fervently in front of him with euphoric elation). He feels embarrassed with nothing; this gesture, even though a braggadocio, is radical and irreversible, and to a certain extent metaphysical. If the world is strange, grotesque, mediocre, bizarre and pitiful, there’s nothing better to do than to exaggerate. If art sinks in confusion and pretentious dullness, you can outdo in jeering at its collapse. If humanity is defeated and corrupted, not only opposing creation to procreation is at stake, showing their fundamental discord (what corresponds to a minimum of lucidity), but deprivation of all belief in human nature: in result, there’s no need of participation in reproduction of the species, since nothing indicates this would be desirable (apart from the blind biological force, codified by all religions). In Jacques Lizène a secret courage of this gesture of uncompromising and irrevocable negation can be felt.

Click here to see his work at the Nadja Vilenne gallery.