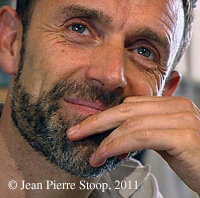 °1962, Roeselare, Belgium, lives and works in Brussels and New York.

Grimonprez achieved international acclaim with his film essay, “Dial H-I-S-T-O-R-Y”. With its premiere at Centre Pompidou and Documenta X in Kassel in 1997, it eerily foreshadowed the events of September 11th. The film traces the history of airplane hijackings as portrayed by mainstream television media. It is composed of archival footage material –interspersing reportage shots, clips from science fiction films, found footage, home video and reconstituted bits and pieces. The narrative is based on an imagined dialogue between a terrorist and a novelist where the writer contends that the terrorist has hijacked his role within society. Grimonprez’s productions have traveled the main festival circuit from New York, Telluride, Los Angeles, Rio de Janeiro, to Tokyo and Berlin. Curatorial projects were hosted at major exhibitions and museums worldwide such as the Whitney Museum in New York, San Francisco Museum of Modern Art, Pinakothek der Moderne, Munich and the Tate Modern in London.