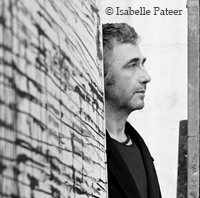 In the early 1980s, European painting was revealed against the hegemony of American conceptual art. From the Transvanguardia in Italy until the Neue Wilden in Germany, emerged a passionate and uncompromising neo-expressionist style. Young artists in Belgium also explored this trend.

Among them, the painter Philippe Vandenberg quickly achieved success with his works in a number of international collections, including the Guggenheim Museum in New York. By the mid-1990s, his style changed. His work, figurative or abstract, became more turbulent. He excels in his black paintings or paintings made with his own blood. In this period abound words and texts on paintings as answers to the senseless pictorial narrative; the use of tendentious themes: beheadings body and painting itself appears mutilated. Vandenberg opened Pandora’s Box in an attempt to capture everything that was irrational and desperate in their world.

Click here to see more of his work at the Hauser & Wirth Gallery.